My first game on this blog comes to an end. Once I was using a walkthrough and lots of emulator speedup and Monster Repellent, it was fairly smooth sailing.

At the end of the last post I had been given the task of finding 5 orbs to enter Coldan. One was in the cave of treasures, 3 are in previous dungeons and towns, and the last is in the Bavaris capital. There, you have to help a random mother who is giving birth:

But then you can get the last orb and head down into the temple to open the door. Once there, General Doran, who let you rescue Fana earlier, joins you. He wants to know the truth about why Bavaris and Mayoor have to fight each other. 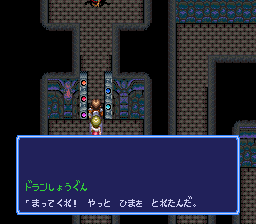 After fighting an easy boss, we finally reach Coldan. It's a futuristic place with small androids and robots running around. There are hints as to what GDLeen is and who Gavana is -- I had thought that Gavana was going to turn out to be Zuul, but that's not where the story is going. 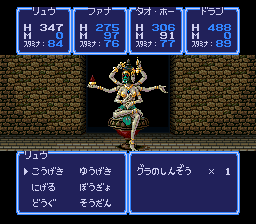 Now, what do bad RPGs do? Send you on yet another backtracking fetch quest. In order to reach Gavana, you need 12 pieces of equipment, which are in locked doors in all the places you've been previously. So it's time to hike back to all the other places again, and find these pieces of equipment. They're the strongest weapons and armor in the game.  As far as I can tell there are no hints as to where these things are (or the orbs in the previous section). You just have to remember the doors from earlier.

You also have to fight Golbas, who is some sort of part of Zuul that you need to beat in order to be able to damage Zuul himself. Golbas injures General Doran, who has to be taken off to heal, and you get a replacement character, the android Array Blue. This seems pointless, since Array Blue is essentially the same character as Doran just with a different face picture.

Eventually we gather all 12 pieces of equipment, and it's time to go to the final dungeon to meet Zuul. This dungeon requires not only the rope hooks from before, but also "hand bridges" that need to be placed to cross open points. I'm really not sure what the designers thought this added to the game.
The monsters in the final dungeon are strange ghost or ghoul like enemies. 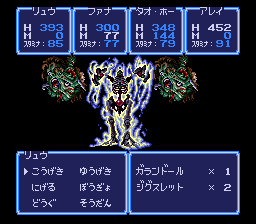 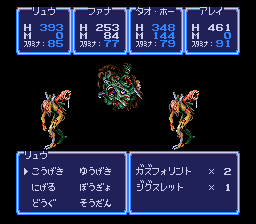 After a trip through this dungeon, we reach the final boss, who has three forms. The final battle was a perfect microcosm of GDLeen's battle system. It took me three tries, although the first two forms are very easy. On my winning run, Zuul got a super critical that did 3800 damage to Array (max HP 500). Next turn, Ryuu did a super critical for 3600 that killed Zuul (a normal hit is 150-200). Fana and Tal Ho were useless on damage in the fight, so I just cast buff and heal spells with them.


Once Zuul is defeated, we enter the room behind him to finally meet Gavana:
What Gavana says is hard to understand, but apparently it's explained better in the novels and Digan no Maseki, from what I saw on the Internet. GDLeen was originally essentially a travelling theme park, with different types of animals, sentient beings, and plants taken from various worlds. But those worlds were destroyed by Zuul and so GDLeen became a kind of Ark, holding the remnants of those civilizations. It is heading towards Earth, because humans are the ones destined to defeat Zuul and control the galaxy -- apparently the Zuul we defeated is just one avatar of Zuul himself, whose goal is to destroy everything. Gavana has lost control over GDLeen because of Zuul's interference. This doesn't really explain why the Bavaris and Mayoor are fighting, though.

Now Ryuu has the choice to leave GDLeen and return to Earth, or stay. Fana asks if you're really going to leave her -- you have a choice, but until you choose to stay, she just stares at you and you get the choice again.

The game then abruptly ends, identifying this as "GDLeen Episode 4". I don't know if the books are supposed to be the first three episodes?

So that's GDLeen. It's not a great game. I'll write some sort of conclusion/review post in a few days, and then write a little bit about the games I'm skipping on the list.

By the way, the music is quite good. Here's the opening BGM.
Posted by Kurisu at 8:02 PM