I'm going to structure this post as more of a review than an account of my playthrough -- at times I've considered that the whole blog should be like that; one initial post covering the first few hours of gameplay and story in detail, followed by a review post. This is partly because it's easier to write, but also I notice that when I read other blogs like CRPG Addict I find myself mostly interested in the first and last post, and tend to skim the middle posts unless I've played the game and know what he's talking about. In some cases (like Dragon Quest V) I've found a lot to write about in each post, but often I struggle to say much because the gameplay is so repetitive and the story is not that interesting. 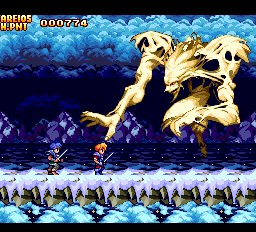 Anyway, back to Xanadu. First, the gameplay.

The game's 12 chapters are mostly structured around the same idea. You warp into a church in the area, and then have to solve a problem in the area to be able to move on to the next place. This involves a great deal of running back and forth from place to place. The NPCs and towns do have a lot of life, with memorable people whose dialogue changes as the game progresses. It reminds me a bit of the Trails series in embryo. It's also an interesting touch that you knock on the doors to the houses instead of just blundering in. 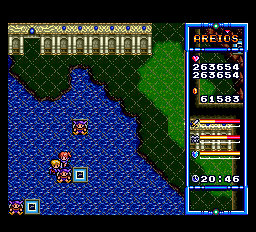 The backtracking gets excessive at times. You will find yourself having to talk to person A, then go all the way out to a cave or area to talk to person B, then go back to A again, and then once again back to B. This to me is the weakest aspect of the game and I've seen Japanese players complain about it as well. The only thing that saves the game from being unplayable is that the travel speed is very fast and you can buy Wings to warp back to the towns (which are trivial to afford after the first few chapters). 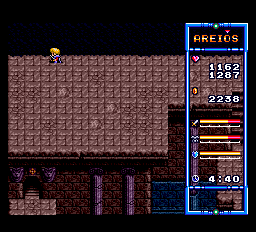 Another issue is that it's often not clear what you're supposed to do next. There are a lot of places where you have to talk to a specific person or go to a location to make the next plot event happen, but sometimes they don't give you any real clues. You'll stumble upon it eventually because the areas are fairly small, but I found this game a lot more tolerable with a walkthrough. 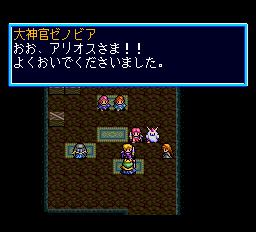 The final stage has a 31 floor castle that puts the Darm Tower of Ys to shame; this is possibly the longest and trickiest final dungeon in any game I've played (Ao no Kiseki had a pretty long final dungeon too). Overall when you think about how short the Ys games tend to be, this game has an impressive volume. 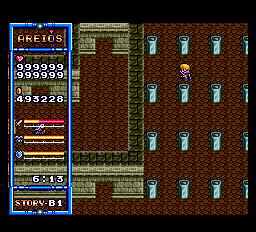 The combat is Ys style. As I mentioned in the first post, the distinctive feature here is leveling up your weapons and armor. This means a lot of sitting in place letting the enemies beat you up, but eventually you'll have a strong enough armor to survive everything in the chapter. 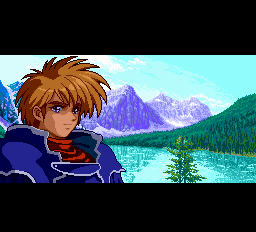 Death is interesting. If you get to 0 hp with no healing items, you turn into a ghost. This actually lets Arios fly freely around the map (through walls, etc), but cannot interact with anything or use stairs. Sometimes this is actually helpful in a dungeon to figure out where you need to go to get to the stairs or item, but you have to make your way back to the town where the priestess can revive you. But this means that there is no such thing as a game over.


I found the side-scrolling action scenes to be the weakest part of the game. There are only two healing items in the game -- one that heals 1000 HP and the other that heals you fully. The full heal elixirs are very rare until the final chapter where you can buy them (for a huge price). So you rely mostly on the 1000 HP heals. In the early chapters, you can easily get enough of these that the action stages are trivial. You just run through them and let the items heal you, and the bosses go down without much trouble as well. 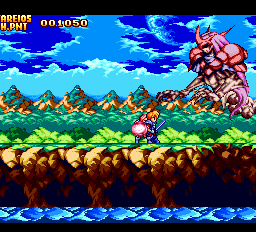 But there's a rather sudden change from this to the point where your HP is too high for these items to be worthwhile. Then the action stages are very difficult. There is no invincibility frame, which means a wrong move can cost you half or more of your HP. I used a lot of save states in these scenes; I would not have had the patience to go back to the church to get revived over and over again. The second to last one is by far the hardest -- I would actually recommend that you use all of your elixirs against the boss; you'll get more than enough in the last stage to make it through the final action stage (which is significantly easier, especially considering how easy it is to make it up to 999,999 HP). Now, I'm not all that good at action games so it's possible others won't have as much of an issue with this. 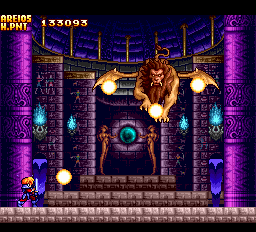 The graphics are serviceable but a bit disappointing; the PCE is capable of better, which Falcom will deliver in Xanadu II next year. The cutscenes between stages are not as good as the ones in other games like Emerald Dragon. 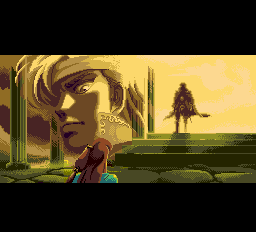 The music is good as usual for a Falcom game. It's unfortunate that all the music outside of the cutscenes are chiptunes, but they probably didn't have the space to make CD audio for all the BGM they wanted to use. 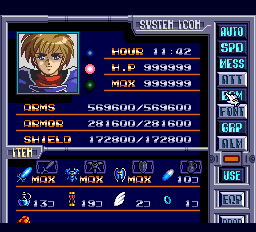 The story is fine. It relies on a lot of old cliches -- chosen descendant, legendary hero, age-old evil, etc. There's not all that much about the overall main plot that's unfamiliar (although the earlier chapters have some interest). What Falcom does do right here is flesh out all the party characters better than most games are doing in this era. They don't just join your party and then never talk again. This, coupled with the rich (for this era) NPC dialogue, makes the world seem more alive.

Overall this is a decent game for the period. I'll be interested to see what changes or improvements they make for Legend of Xanadu II. 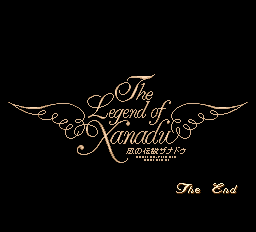 Next up will be a return to Super Famicom with the game Kabuki Rocks (after Majin Tensei II on my other channel).
Posted by Kurisu at 1:59 PM 3 comments: 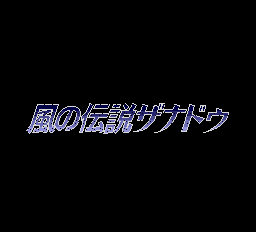 This game is part of the long-running "Dragon Slayer" franchise by Falcom. The title Xanadu first appeared as the second Dragon Slayer game, which CRPG addict did a review of (although he didn't like it). For a while I thought the PC Engine would be a remake of that game, but it's actually an entirely new title. Falcom normally did not develop console games, relying on other companies to make ports of their games to various consoles. But here they actually were behind the development, and of the 1995 sequel.

There is a fan translation in progress, but I believe it is stalled for a long time over the voice acting to dub the cutscenes. 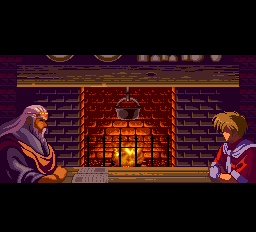 It looks and feels like a combination of Legend of Heroes and Ys. The main gameplay is the top-down "run into the enemies" style of Ys, but each chapter ends with a side-scrolling action section that recalls the earlier Dragon Slayer games. This game also carries over from the older Xanadu the system where each weapon and armor has its own experience level. When you get a new weapon or armor it typically starts anywhere from 30-50% power. So if the sword has a max 100 power it might start only at 50. You level up weapons by attacking, but not killing, enemies (so once you start killing enemies in one hit, you can't level up the weapon on them anymore). You level up shields and armor by taking damage, although eventually enemies in an area won't be able to harm you anymore. 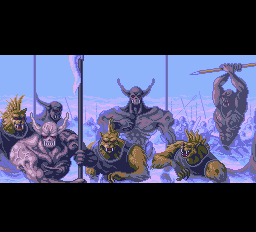 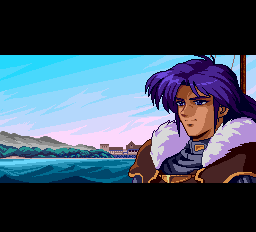 The game is divided into 12 chapters, each of which takes place in its own little area usually with a couple of towns and dungeons. This game is well known for having a lot of running back and forth between places talking to people, and it's not always clear who you are supposed to talk to or why. I definitely think this game benefits from a walkthrough. 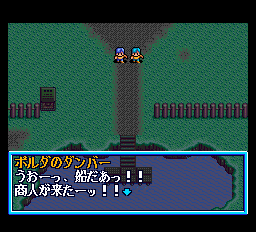 The main character is Areios, a knight commander in the kingdom of Ishtar. He begins shipwrecked on a small island. His goal is to get back to the kingdom, but while he's waiting for the boat he decides to solve a problem happening in the island. Two towns, which produce different kinds of alcohol, are rivals, causing a bunch of problems. 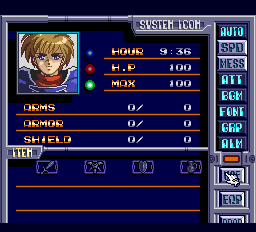 The graphics are somewhat disappointing, but serviceable for the game. The music is good but unfortunately it's almost all chiptune music instead of the CD-quality music that Falcom used to such good effect in the Ys games. The only voiced sections are the short cutscenes between chapters. 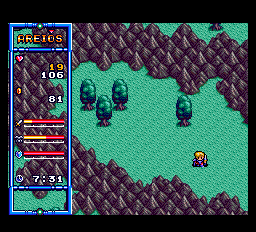 The action scenes are not too bad; the enemies do a lot more damage than the ones in the normal areas, but you get to shoot a wave out of your sword. 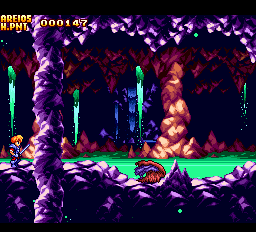 If you equip the healing items, you get restored 1000 HP when you get to 0, so that makes the action scenes fairly easy -- even if you don't really figure out the boss patterns you can just sit in front of it and attack and you might use a couple of heal items, but that's easily replaced. 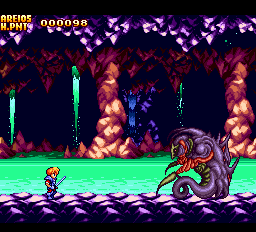 I'm up to chapter 3 now, so I'll say more about that in the next update. The story is not bad, and the NPCs and towns are memorable. Overall this is a pretty good game although the fetch quest nature of the gameplay can get somewhat annoying.
Posted by Kurisu at 5:53 PM 2 comments: