So this game is not really an RPG, it's a console version of a roguelike game. If you want to play it, there's a patch available. It has quite a good reputation.

The next game on my list is Trinea, which doesn't qualify for my definition of an action RPG.

So the next actual game on the blog will be the PC Engine game Startling Odyssey, which later had a PS1 remake. Not sure I will be able to play it enough by Saturday to do the normal Saturday update, though.

Also check out Shining Force on my other blog.
Posted by Kurisu at 5:43 PM No comments: 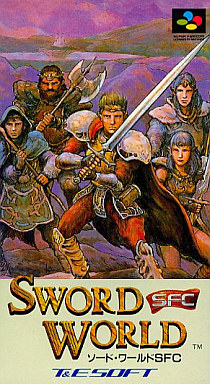 The cover of this game is quite different from the usual anime-themed cover of Super Famicom RPGs -- it almost looks like the box cover art that would be used for the English release of games. But it does indicate that this game is quite different in many ways from other RPGs. I actually had a lot of fun with this game; it has flaws and it wouldn't appeal to everyone, but I probably enjoyed this game more than any one I've played so far other than Dragon Quest V. 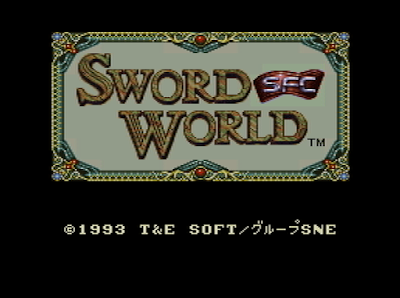 It's based on a tabletop RPG that came out in Japan in 1989 and still is (supposedly) the most popular RPG in Japan. I think what was so endearing about this game to me was that it captured the nostalgia of playing D&D in the 80s and 90s with friends. The game is built around 19 short scenarios (of which only 12 constitute one playthrough). They feel like the kind of adventures we would make in high school -- get some sort of mission or quest in the town, explore a dungeon or maybe solve a short mystery, do a few fights, and get some treasure. Most of the quests are stand alone, but there are a few recurring characters and they do manage to do a wrap-up climax in the last two missions. The story's not going to win any awards but it was interesting enough.

In fact, after this game's release, there was a companion book for use with the tabletop RPG, that had all the quests from this game and the PC game, plus another 37 that they hadn't been able to include for space reasons. So I can definitely see this having been even more fun to players at the time who did play Sword World, the same way I enjoyed the Gold Box AD&D games more because I was a D&D player.

You start the game by creating a character. You get to pick a race (human, elf, dwarf, grass runner, or half elf). If you pick Human or Half-Elf you also get to pick a background for your character. All of this determines your starting stats and levels. Rather than a strict class/experience system, you can freely level in different classes, with a max of 5 in each class. Your "character level" is the highest level you have in any class, and determines damage reduction and a few other stats.

The classes are Fighter, Thief, Priest, Shaman, Sorcerer, Ranger, Sage, and Bard. The way the class restrictions work, some classes don't work well with each other -- for instance, Sorcerer needs a magic staff to cast spells and only light armor, so that doesn't go so well with Fighter. One problem I did have with the game is that without the TRPG rulebook, it was hard to tell what some of the classes did or what levelling up the class would help. Sage was the biggest puzzle; the instruction manual says that this means you have a lot of knowledge, but it's not clear what gameplay effect that has.

I chose a human who had been a scholar, and thus started with Sage 1. I then used her initial experience to level her up to 2 in Priest. 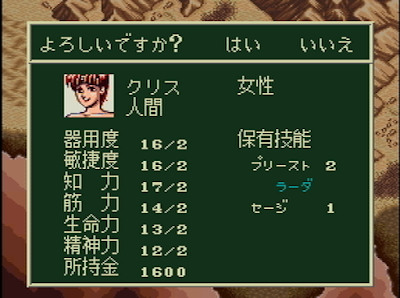 The basic flow of the game is that you find a place to get a job (usually an inn). But first you need 4 companions, which you can choose from a number of people that are wandering around the two inns in the starting town. I got the following:
After this, it's time to equip the party. Once again I was hampered by my lack of knowledge of the system since there's no clear indication of how a long sword, a maul, a morning star, and a spear are different. Some classes have restrictions -- mostly that they can't use metal, or that their armor or weapons can't weigh more than half of their strength. All characters have a restriction that the equipment can't weigh more than their total strength. When you buy weapons and armor, you can choose a range of weights depending on the item, and presumably a heavier weapon does more damage? 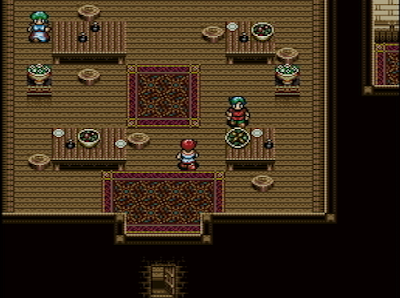 I beat the game pretty quickly, and so I don't think I'm going to do a blow-by-blow account of all the missions. I'll describe one in detail and then summarize some of the other key jobs that are related to the final story.

The first job involves an antiques dealer who is collecting God Statues that resemble weapons, and he has arranged to buy the axe statue from the Dwarf mountains. This actually turns out to have a connection to the overall story, but for now it's just a fetch mission.

Unfortunately it turns out the axe has been stolen, so the first real quest is to get it back from goblins. The dungeons have a convenient automap feature, which also feels tabletop RPG-ish. 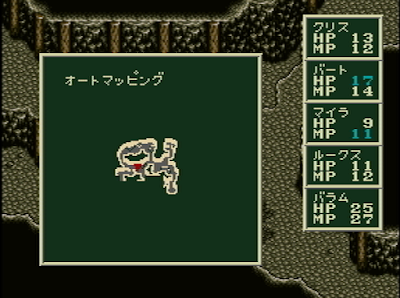 There are no random battles, instead when you meet monsters the game switches to a battle without going to a separate screen. 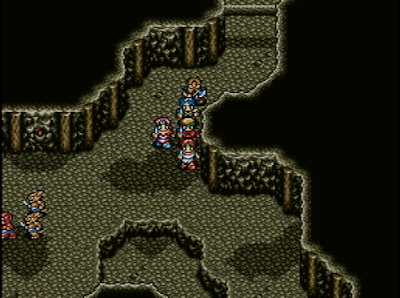 The battles play out on a grid, with faster units going first. The interface is very easy to use. Spells don't seem to have a range, but they can have an area of effect. You can also boost their damage or effectiveness for more MP, and can use magic stones to substitute for MP if you're low. As far as I can tell, the enemies do not return if you leave the dungeons, so you can rest freely. Misses are very frequent (on both sides), which also reminds me of a tabletop RPG.

The rewards for beating monsters are not especially high; you mostly get XP for completing quests. On the whole, the biggest problem I had with this game is a lack of feeling that your characters are getting better. HP and MP you have to pay for, and it's pretty expensive -- I never actually increased any character's HP or MP.

At the bottom of the cave we find a dark elf. 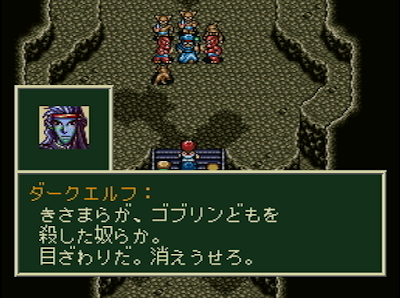 He's pretty tough -- fortunately you can save anywhere. The second time I tried the fight I used Sleep Cloud and it put all the enemies to sleep, which made the fight easy. In general Sleep Cloud is quite a powerful spell for most of the game.

Now with the axe, we can head back to the city and get our reward. Job 1 is finished! The XP can be used to buy level ups or stat increases.

The second job involves poisoned food -- first we have to investigate the harbor, and then a cave where Sagran, a disciple of the dark sea god Milreef, is plotting.

The third job involves the thieves' guild. A thief seems necessary for this game -- not only to disarm traps and open doors and chests, but to enter the thieves guild for information.

Job 4 is also important to the overall plot; it introduces Tsure, who is trying to be leader of the nomadic desert people. He needs to find a water crystal in a tower to prove he is worthy to be the next chief. After saving his sister from assassins sent by a rival, we help him get the crystal and prove his worth. 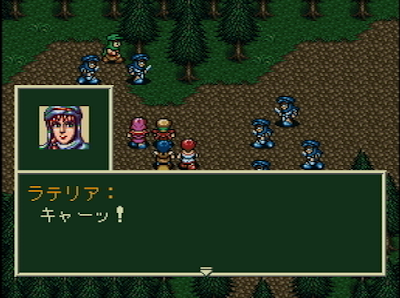 Job 6 is protecting a ship from undead attack -- it turns out they are related to the Dark Sea God (from mission 1), and are sacrificing ships to the god.

Job 8 has us rescuing another adventurer from the Lex ruins. He's looking for secrets in the Dragon Temple. We run into Tsure again, who seems more sinister this time -- the nomad people are looking for the god weapons (from the first mission) and threaten to kill us if we get in their way.

Job 10 brings Sagran back, and in Job 11 we learn that the nomad people are trying to get the god weapons to summon the God-Killing Dragon, to deal with the Dark Sea God that will soon arise.

This brings us to the final quest, stopping Sagran and the Dark Sea God. This is the longest quest yet and involves a number of dungeons, with mostly undead enemies. The Holy Light spells work well, since many of these enemies cannot be hurt except by enchanted weapons -- as far as I can tell there aren't any magic weapons you can find (another disappointment about the game), so you have to cast Enchant Weapon to kill them.

Along the way, Tsure is injured and we receive the God Statue from them, to help us in the final battle. 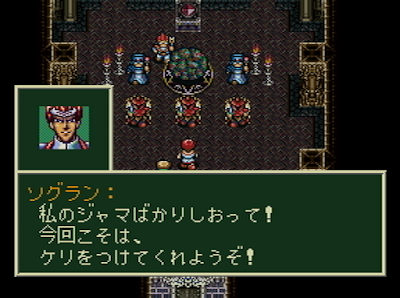 Eventually we find Sagran, but he runs away and leaves grunts to fight. After dealing with them, it's another dungeon, but then the final confrontation with the Dark Sea God. 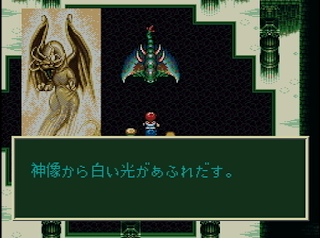 The first step is to use the God Statue, which makes the God Killing Dragon arise and drive away the god. 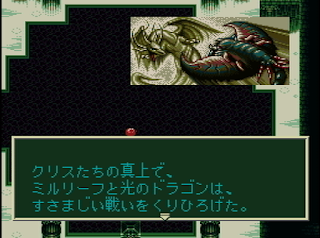 Now all that's left is the final fight vs. Zombie Sagran. This is a fairly difficult fight -- I had the max of 300 magic stones (which can substitute for MP), and basically I enchanted everyone's weapons and then cast my most powerful damage spells. I focused on Sagran until he finally went down and then the others.

After the fight, the players are hailed as heroes, and retire to help support other adventurers or something like that. 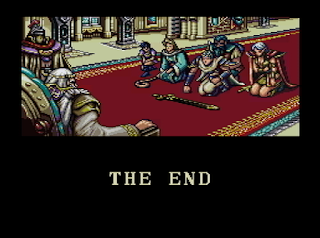 I was then told I had completed 65% of the game -- there are still 7 more scenarios I didn't do, and an optional grinding dungeon I didn't touch either. So this game has replayability, since I could also have tried with a totally different party.

So on the whole I enjoyed this game a lot. It has flaws and I can see some people not liking it, especially since in many ways it's closer to a computer RPG than a typical console one.

Also worthy of mention is the soundtrack, which is pretty good. Here's a link to a playlist (starting on one of the dungeon themes). There are 80 songs, which is impressive in a game from this era -- I think that's even more than Seiken Densetsu 2.

Sadly there's no translation patch, but maybe one of the hard working groups will take it up at some point.

Up next is Shining Force on my other blog, then the next game on my list here is Final Fantasy Mystic Quest -- I remember playing this several times as a kid, but since it has an English release I'll be skipping it. Next up then is Torneko's Adventure, a roguelike-inspired game from the Dragon Quest world.
Posted by Kurisu at 9:35 PM 11 comments: