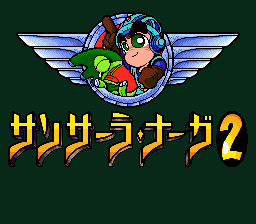 This is the sequel to a Famicom game from 1990. It looks like a Famicom game in many ways -- the graphics are definitely the low point of the game. It's party the ugly character designs of Oshii Mamoru, but also just the generally low quality of the graphics. 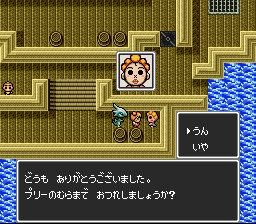 The story background is that the main character was found as a baby abandoned in the Dragon Guild Ryuen, with a small egg. The egg never grew or hatched, and people made fun of her, except for Amrita, who was her only friend. But one day Amrita suddenly burned down Ryuen, taking her egg and running away. Her goal is to reach the top of the 8 worlds that constitute the universe. At the same time, the main character's egg grows and hatches, producing a White Dragon, something seen only once in 100 years. Since Amrita destroyed all the other dragons and eggs, it's up to Kurisu to take her White Dragon and chase after Amrita. 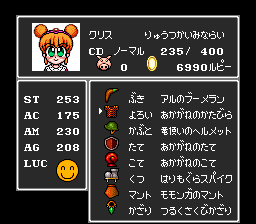 The main character does not level. Instead, each time you advance to the next world (out of 8) you get 200 more HP and some other stat upgrades. There is a lot of equipment, but it wears out and breaks after a while. This is incredibly annoying, and I don't understand what they thought it added to the game. It just means that you're constantly having to juggle equipment, buy extras of everything, check after battles to see if anything broke, etc. It also means that if you find a cool new piece of equipment in a dungeon, or receive one from the noodle shop stamp collection, it's not all that exciting because you know it's just going to break in a little while.
The game is standard DQ2-style. The dragons have "Mantras" which are spells, but the main character has nothing but attack. 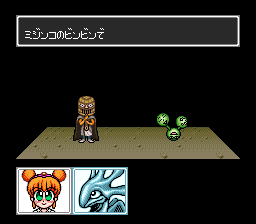 When you finish a battle, you get the choice of eating the monsters (which recovers some HP/MP for your dragon and gives them a little XP bonus), or taking the corpses. The corpses can be sold at any Haratama Noodle Shop for money. There are 64 shops in the game and each one gives you a stamp; every 8 stamps you get a prize (which will soon break, so what's the point?)
The first goal is to get a helmet, since every dragon rider needs one as the symbol of their position (the helmets may be unbreakable). Since Amrita burned down the equipment there's none there, so the main quest of the first world is to get this helmet of a previous legendary dragonrider Al Sinha. This involves solving some minor problems typical of RPGs -- a town being controlled by a selfish power hungry guy, etc. 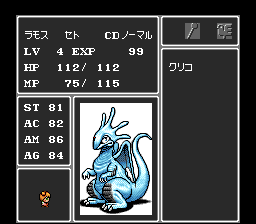 In the Naga cemetery you learn more of the backstory of the dragons. All the different dragons in the world are descended from one egg, and the goal of all the dragons is to produce the Final Dragon, who has already been born. Al Sinha's spirit gives the main character his helmet and repeats the command to go find Amrita.
So now we move on to the second world. When you move on, you can't return to the previous world (and at the end of the second world we learn that the previous worlds cease to exist once you move on).
My dragon (Ramoth, named after the Pern series) is pregnant with twins! I have to buy two charms at the end of the first world, which will determine the colors of the dragons. I decided on Blue + Red, which seemed like a good combo (the other choice is Green, which is a priest type character, but Ramoth can already cast healing spells).
There's a convenient cave in the second world for her to give birth, but she's worried about the egg thieves that everyone is talking about. So first we have to deal with that. This involves mostly a large investigation quest with two feuding companies, Taj and Mahal. 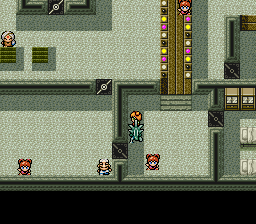 Once this is dealt with, Ramoth is ready to give birth, so we head to the hospital. This is by far the most annoying part of the game. We learn that Amrita was here and her black dragon wasn't born by an egg but tore her way out of her mother's womb; the nurses who saw the bloody scene are scarred and never want to deliver another dragon.

The babies are born safe, but now we have to feed them. You need a huge number of monster corpses for this -- at least 200, maybe as many as 300 or more. I was warned by a walkthrough to save up corpses but I didn't save enough. Also you lose Ramoth for this section so you have to fight enemies with the main character alone, while her equipment breaks over and over again. 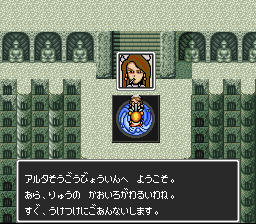 Finally we get enough corpses for the food, and now you have to register the babies, which involves what I guess is supposed to be a parody of bureaucracy, running around talking to different people in a huge office and getting forms. The parody is just as fun as the real thing.

Then as you progress a bit, your dragons get an illness. You have to go back to the hospital again and wait a long time for the doctor to fix them. I don't get what the point of this whole sequence is. 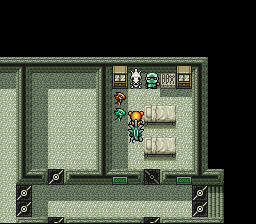 I was also really upset to find out as you can see in the above screenshot, that I had accidentally gotten a green dragon instead of blue. Green + Red is the worst combo for beating the game. I moved on to the third world and found myself in a tough situation.
At this point I can barely win a single random battle, I can't get to a Haratama to sell things for money, and I don't like my dragons. I think I have to start over with the Blue + Red combination and make sure I'm a little more ready for the third world. My rules say I have to beat this game because it has no patch or translation, but I don't think I can face starting it over right away. I'm going to at least play Tactics Ogre for my other blog. After that if I still don't feel like playing this game I will just move it back a few games on the list so that I can come back to it in 4-6 months when hopefully I can come back to it fresh.
Posted by Kurisu at 3:20 PM 3 comments: 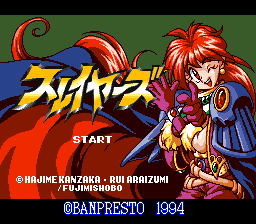 I've played quite a few games based on anime/light novels for this blog. In general, they've been cheap cash grabs with none of the charm or interest of the original series. Slayers is a popular light novel series that was made into an anime; I remember watching all three seasons in college. The Slayers video game is different from some of the others in that the original writers of Slayers was involved in the project and it fits in with the series better than games like Ranma or Fist of the North Star.

Often the difficulty the creators have is how to transfer the original context to an RPG. For instance, Fist of the North Star involves people who can kill others with a touch, and who can only be matched by one of the few people who also have skill in these martial arts techniques? How did the Fist RPGs deal with this? By completely ignoring it and having Kenshiro and the others fight grunts with nunchuks or regular punches.

Slayers has a similar problem -- in the original series, Lina Inverse is supposed to be one of the most powerful magicians in the world, able to use devastating magic attacks that can destroy towns. So this game begins with Lina having lost her memory, as well as all but a few of her magic spells. This allows for the growth that you expect in an RPG without violating the storyline of the original. It may seem like a cheap way out, but it is involved in the story more than you might expect at first. 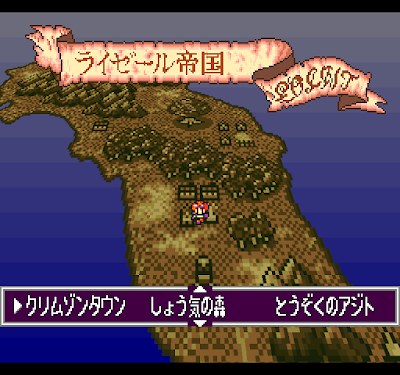 There are a large number of characters from the series in the game, including a number from the novels that I was not familiar with. Other than Lina you can't choose who you want to have until very late in the game. Each character has the same basic RPG choices but with a special move. Sylphiel can use her magic on everyone, and Lemmy does an all attack, to use two examples. Most of the time the characters do what you tell them to do, but certain characters (particularly Naga and Amelia) will do their own thing from time to time.

The graphics are good in some parts, like the character portraits in the status screen: 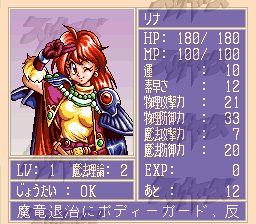 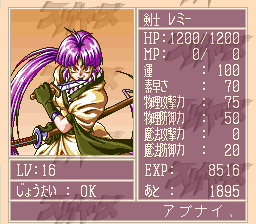 The battle graphics are relatively good too. 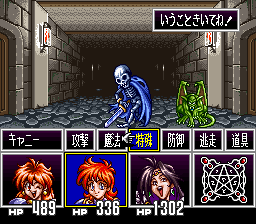 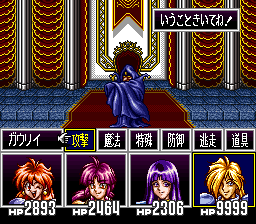 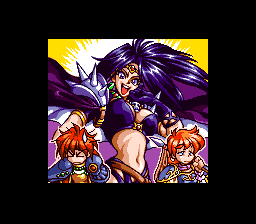 But the map sprites are really disappointing; they could have done a lot better with these. 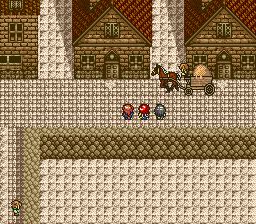 The equipment system is pretty disappointing as well. There's no money from battles, only from chests, The equipment upgrades are fairly limited (and as usual you can't see the stats of items until you buy them.)  On the whole, the RPG elements are not as robust as they could be. The battles tend to be quite simple; you regain your MP whenever you level up so you can use spells a lot (which I always appreciate). The bosses are typically highly resistant to magic so you basically have to buff and heal for them. Resurrection, which heals 9999 HP and brings characters back to life costs only 10 MP so you rarely have to worry about a game over except in a few fights. By the end your party is three level 99 characters plus Lina, which makes the final battles quite easy. 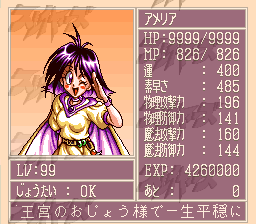 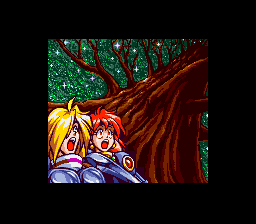 The story gains some interest later in the game when you learn more about why Lina's memory is missing; it's nothing amazing but it's entertaining enough. Then once you beat the main game you get a short post-game storyline where you can choose any party, giving you a chance you use your favorite characters in the end part. 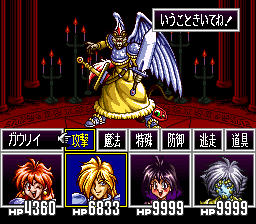 This game has a translation patch. It's definitely worth playing if you are a fan of the Slayers anime (or light novels); as an RPG it's somewhat lacking but it's a smooth playthrough and doesn't have anything that will frustrate you.

Next up is Sansara Naga 2.