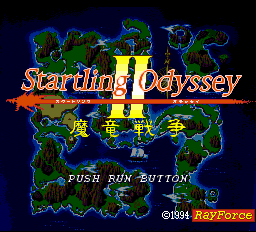 This is Ray Force's third (and final) game for the PC Engine. SO1 was a basic, cookie cutter RPG. SO2 is another basic, DQ2-clone RPG. It is more polished than the first one -- the graphics are better, there are more voiced cutscenes, the interface is cleaner, and the game as a whole moves more quickly. So if you like old-school, basic RPGs this one is probably not bad. There's even a translation patch, although it probably doesn't translate the voiced cutscenes.

As usual with this kind of game, I have very little to say about the gameplay. You buy the best equipment you can afford, use auto battle for most fights and hold down a speedup key, and go through dungeons and open chests and find the boss or goal. Rinse and repeat. 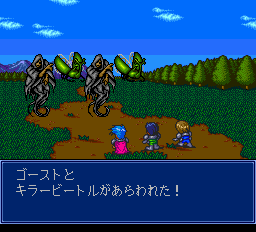 The game starts with some kind of magician or researcher causing demons to come into the world, and then the main character Robin killing a Chimera with one hit. He's well known in the kingdom for being the Blue-Haired Knight 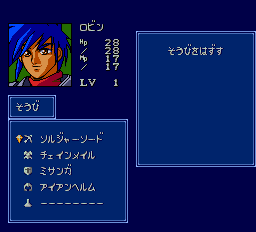 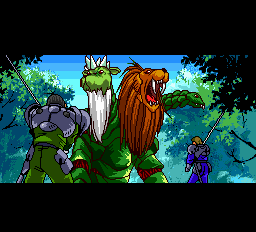 Back in the capital city, Robin talks to the king's daughter, who is his half sister. He gets a new mission to head to Neria town to the south and see what's the matter there, taking his two best knights with him. 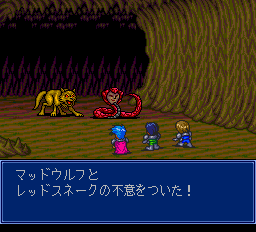 The townspeople say they saw a dragon, and going through the cave we come across the room where the magician from the opening was summoning the monster, but now it's gone. So back to the castle...where it turns out monsters have overrun the castle and killed the king. Robin's sister has gone on ahead to try to seek safety, so we follow her through the underground passage. 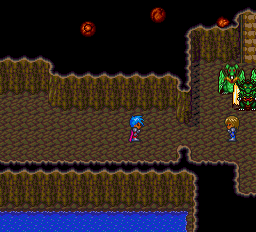 Robin's two knights have to push him away and collapse the corridor when they're attacked by dragons, and Robin goes on himself. Attempting to continue his escape a bridge falls away, sending him into the ravine. 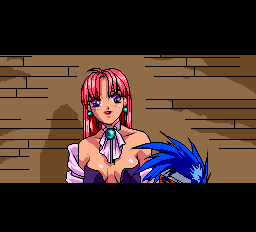 He wakes up later in the care of Julia. He's been out for three days and is only now recovering. But when monsters attack the town, he heads out even in his weakened state. 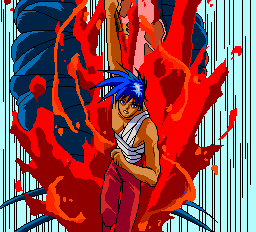 The PC Engine allowed for more violence and sexual content than the Super Famicom. Anyway, this reopens Robin's wounds and he has to rest for a while more, but after he's healed he finds out that a child in the town is sick and needs a special item (the wing of an animal) to heal him. Julia joins him and they go out in search of the wing. They have to beat a boss: 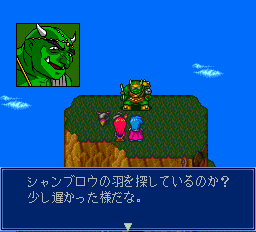 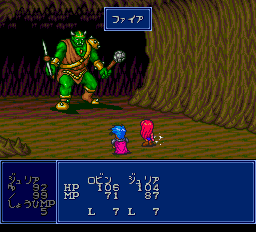 And then find the wing and cure the child. At this point Robin decides he needs to continue on his journey (to find Patricia, his sister) and Julia decides to come with him.

This is where I stopped. As I said in the intro, this is a playable DQ2 clone -- if that's the kind of game you like this is a better game than other examples of the style. At the same time, I really would like to see them doing something innovative in 1994. Even Dragon Quest itself didn't make any true DQ2 clones.