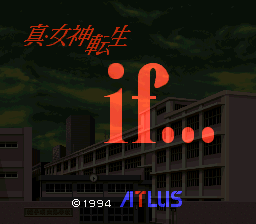 The third SMT game for Super Famicom, it was released only 7 months after SMT 2. So unsurprisingly, the system is almost the same and there are a lot of reused assets from the game. The idea was to make a SMT game that took place more in the real world, in a small area, rather than the post-apocalyptic or fantasy settings of the other games. The high school setting, and the "guardian" system, were direct inspirations for Persona. The title of the game may have been taken from the British movie "if..." which is about bullied studies staging a violent revolution at a boarding school. 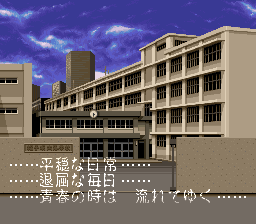 The biggest system change is the Guardian system. Both the main character and the companion have "guardians" that attach to them when they die. The companion gets more spells from this process, the main character just has stat changes. I didn't fully understand the system until halfway through the game since they don't explain it much (I assume the full explanation was in the instruction manual). By fighting monsters you gain Guardian Points, which you can see by pressing X on the status screen. If the bar is yellow, dying will result in a lower rank guardian. If it's red, the rank will be higher. The more full the bar is, the better chance you have of skipping multiple ranks.

This means you really need to control when your characters die, which can be frustrating especially with the many monsters that have instant kill spells. However, it does mean that a game over doesn't send you back to your last save. 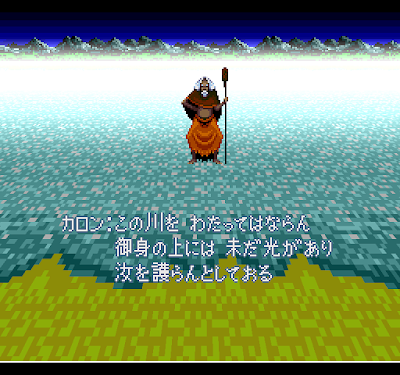 The other changes: Guns now have limited bullets, you can't do sword attacks from the back row of the party, and you can level up your proficiency with a specific sword by using it a lot. This last thing is a hidden parameter that I didn't know about until just now when I looked at the Wikipedia article. Finally, the Law/Chaos/Neutral system does not have any effect this time except which demons you can recruit, and the alignment is determined purely by what demons you have in your computer. 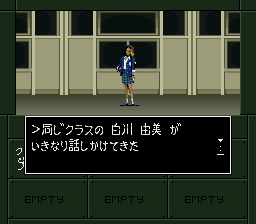 The game begins with the high school getting sucked into another dimension. All of the exits lead to strange areas of space, so nobody can leave. The rumor is this has something to do with a student named Hazama. The first task is to choose your companion. There are four companions, each with some differences.

This is a nice feature that allows for some replayability. In 2004 there was also a Hazama story released for mobile phones, but I don't know if this was ever released outside of the phone or whether it's even available now. 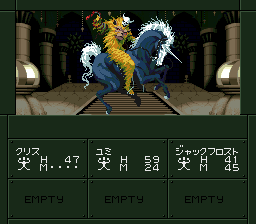 I went with Yumi since she's the first one that pops up (I wasn't fully aware that I was choosing a partner at this point, but that's fine). Most of the school is free of encounters and has a save point and a healing spot (for the humans), and we can pick up weapons and armor from the sports club rooms. One area of the school on the first floor has some demons, and leads to a gym where we find a summoning circle; the Demon King (Hazama) has us fight a weak monster. I died the first time and had to go back and pick up a Pixie for healing.

Once the monster is beaten, we receive a ring that lets us access the area "Between the Seals", where the ring opens up one of the doors. At this point the rest of the game is accessed from here -- we go through the dungeons of Pride, Gluttony, Sloth, Envy, and Greed. After those five, the upper levels of the school are unlocked and the final confrontation takes place. The dungeons have towns with shops and healing places, casinos, etc. There's no real explanation of this. The story also doesn't advance much in these dungeons (to be honest, the story is very minimal, at least on Yumi's route.)

Pride is a simple, short dungeon that doesn't have any particular tricks or difficulties to it -- just get to the end and beat the boss. I think I did a little bit of grinding for money to buy armor, and get some monsters.

Gluttony is a longer dungeon that's a bit more complex. At the end we have to hide ourselves in food to get eaten by this giant monster and then fight a boss inside the monster. It turns out the monster was actually the school principal. 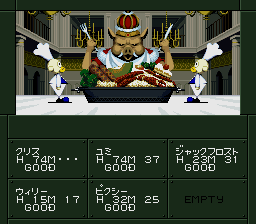 Sloth is an incredibly annoying dungeon. On the third floor, slave drivers are making the students dig in the walls. They will dig one area for each full cycle of the moon you spend on the floor, and the encounter rate is insane. So basically you want to make a demon with Estoma (I made Unicorn from Elf and Cassie (the dog)). Even with Estoma it takes forever to advance the time enough to pass this part. I honestly don't know what the designers were thinking -- either the game didn't get playtested enough due to the short development time, or people still didn't quite recognize that they shouldn't put things like this in a game. 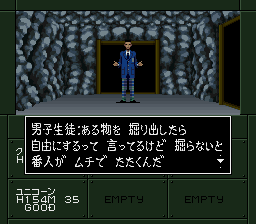 This is also the point where I had a similar experience to SMT 2; I found that the summoned demons became less and less useful. Especially with the large number of monsters that have instant kill techniques; I could barely keep the monsters alive for any fights and ended up just doing most of the game with the protagonist and the companion.

Envy makes you lose your companion. You can also (if you are the male protagonist) buy a Skull Armor here that deflects all physical attacks back on the attacker -- this totally breaks the game balance; you can't win every single fight just through Auto because not every attack is physical, but it certainly makes the game significantly easier. This dungeon also has a lot of dark places, warps, and places where you can't use the computer. 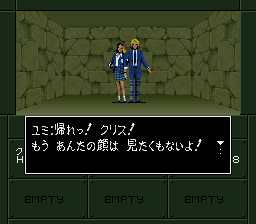 Greed is another long, warp dungeon but the gimmick is that there are a series of chests near the boss that have some of the strongest equipment in the game, but the more you take, the tougher the boss will be. I went the cowardly route and opened none of them; if you do that, the boss goes down in a few hits. 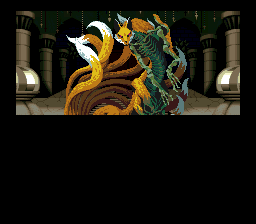 After this, the upper levels of the school open up. I went back to Greed to get the series regular, the strongest sword Hinokagutsuchi (you need one of the top Guardians to get this). With that sword and the physical attack deflecting armor, most of the monsters are not very difficult. Finally the last few levels have no monsters, and then we fight Hazama at the top

With the powerful sword and the armor he really couldn't do enough to me to put up a real fight. The only difficulty is that he repeatedly uses debuffing powers. Particularly the one that lowers your hit rate is problematic, and by the end of the fight I was missing every attack. You should probably bring along a demon that can cast the hit rate+ spell. Fortunately by that point he was weak enough that he killed himself with a reflected physical attack. 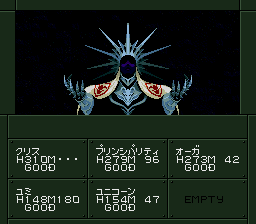 The conclusion is pretty disappointing on the Yumi route. You never learn anything about Hazama's motivation or background; the school just goes back to normal and you leave to resume a normal life. Let me know in the comments if you played the other routes. 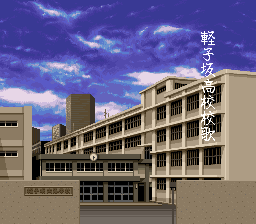 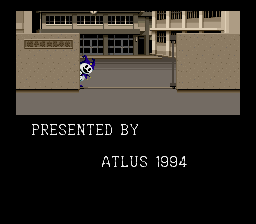 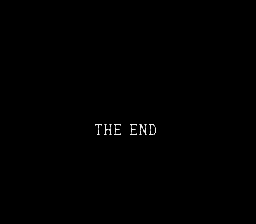 I could play some of the other routes, but I feel like this basic SMT gameplay is getting pretty crusty at this point. I'd like to see the dungeons do more interesting things. Wizardry 1 back in 1980 built their dungeons mostly on mapping tricks -- pits, spinners, warps, dark areas, etc. Although the SMT games do certainly have more variety and more going on than Wizardry 1, I still feel like they over-rely on these old tricks that just aren't all that interesting anymore.

Next week, another kusoge attempt at an AI-only battle system.