After my difficulties in the last post I levelled up quite a bit. At first it seemed like the grinding would take forever but there is a room in the last dungeon, where you get the same encounter most of the time. The jellies/slimes in this area reproduce as you fight them, so you can end up getting 8-16k XP per fight. I levelled to 37.
After that it was time to take on Ted Broiler. For some reason I forgot to get a snapshot so here's a repeat of him from the first fight.

Most of Ted's attacks are fire-based, so if you put the right code into the Love Machine to raise an anti-fire barrier, the only attack that can hurt you is a regular attack. It does a huge amount of damage and the first time I tried fighting him it killed someone in one hit, but after the levelling it "only" did 2/3 of their HP. Unfortunately there's a lot of luck in this fight because he can restore his HP to full with a drink. Most of my guys couldn't damage him, even at that level, so it was all up to getting enough critical hits before I ran out of healing items.

Ted, of course, is pissed off at dying because he wanted to become immortal like Bias Brad. Sorry! At this point here is my list of wanted monsters. 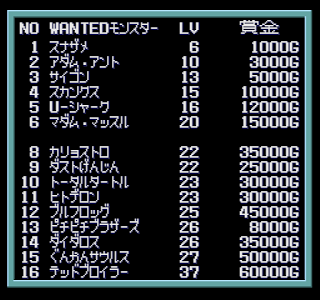 The missing one is a rare monster that runs away a lot and is hard to encounter; I didn't feel like running around in circles to find it.

Now all that's left is Bias Brad. A few more levels of the dungeon, going back to refill my shots and HP, and I was ready to fight him. In order to stop himself from dying he put himself in a machine.
This is a tough fight. He attacks 3 times a round and the attacks do huge damage, so all I can do was pray for enough criticals to beat him -- when a regular attack does 70 and a critical does 950, what else am I supposed to do? Of course Pochi the dog dies quickly.

Now it's Bias Brad's true form.
You'll notice that the first two tanks have SP of 0. This means that further attacks have a chance of disabling or destroying parts. Eventually enough parts get destroyed that the tank has to be abandoned and dragged back to a repair facility. Switching the love machine code gives you an anti-electric barrier. This blocks most or maybe all of his attacks. So with this trick he's not too bad, despite the weakened tanks.

There really is no ending to the game; Brad doesn't want to die, but he does anyway. There's a credits sequence that shows all the wanted monsters you beat, your final tank and human stats, and then your characters wake up on a beach, having escaped the Bias tower as it was crumbling.
Overall this was a decent game; I think it has a lot of balance issues, but it was fun to play. Review to follow, probably on Saturday.
Posted by Kurisu at 7:04 PM