3x3 Eyes: Legend of the Advent of the Divine Demon (3×3EYES 聖魔降臨伝) 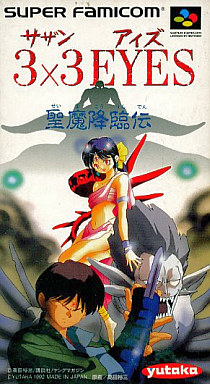 Fifth and last in the series of 5 crappy games in a row is 3x3 Eyes: Seima Koriden. This is based on a manga (pronounced "sazan eyes") by Yuzo Takada, which ran from 1987-2002 and has a continuation that may still be running. I'm not overly familiar with the series. I know that the main character, Yakumo, is immortal after being resurrected by the demon Pai. Pai's goal is to become human, but they have to fight off all kinds of demons and monsters throughout the series.

Supposedly this game is based on stories from the manga, but I won't be able to comment on this since I only read volume 1, a long time ago.

The big problem with this game seems to be the system where any death (other than Yakumo, who can't die) is a game over. I never like the systems where you get a game over when certain characters' HP drop to 0. It seems to introduce too much tension into the game just based on luck of critical hits and the like. But this system has been used so far in GDLeen, Light Fantasy, Hokuto no Ken 5,  and I think Villgust. What makes it so bad in this game is that Pai is too weak, and the third character that changes from time to time tends to be weak as well. Also there's no system in this game where you can keep your levels and items gained since your last death, it's just game over.

But most of the complaints seem to center around the final dungeon, where you get a party member who dies in one hit to the final boss. People say it takes 3-5 hours to build up the character to the point where he can survive, and you can't save your game, and the grunt monsters can also sometimes kill the character in a hit. I can guarantee right now that when I hit this point I will use a cheat code to make the levelling fast.

Anyway, let's get started. The opening story is hard to follow since I don't know any of the characters or what happened in the first 5 manga volumes, but essentially a pillar of light appears. Pai, who has been away, reappears, asking for Yakumo's help again. A great demon named Taisoei will soon enter the world through a hole that has opened up to the Holy Land.


In order to close the hole, we have to find 5 keys, make a covenant with someone at Kunlun mountain, and then defeat Taisoei. Helping us find these keys is Ling Ling, a magazine editor. Fortunately one of them, a sword, is right by the light pillar so we're already on our way. Pai calls Takuhi, a large bird thing, to take us to Hong Kong.
Our next clue is an incense burner, which is sold in town, but unfortunately a man named Jake already used it, so we have to fly all the way to Tibet to find him. The ticket costs $4000, and this is one of the second complaints I've seen about the game. There are various things you can do in the game due to poor design or bugs that can leave you stuck. In this case, if you fail to buy Plastic Bombs before you go to Tibet, you'll have to spend $8000 to return to Hong Kong and back to Tibet again. You can't afford to make many mistakes like this when the monsters give you little money at the beginning (and there aren't any monsters at this point in the game).
Anyway, once we do reach Tibet with the bombs, we can free Jake from prison. He's a treasure hunter who is looking for immortality, and he gives you the incense burner as long as he can come along. Yakumo has a sword and there's a dagger for Pai, but at this point in the game you can't buy any equipment and Jake has no weapon. There are a lot of little strange design choices like this throughout the game.

One interesting feature is the "white paper" you buy for $10. You can use these to create talismans, which have various effects (healing, escape from dungeon). I'm not sure exactly how the system works; you say which type you want to create and then how many, but you don't always get the number you specify. You can do it on the fly, though, which is helpful in dungeons.

Now that we have the Incense burner (key #2), Ling Ling has more information -- the next key (a sacred spear) can be found in Greece. So it's off to Athens. Here we go to the Ruins of Agora which is the first actual dungeon of the game. 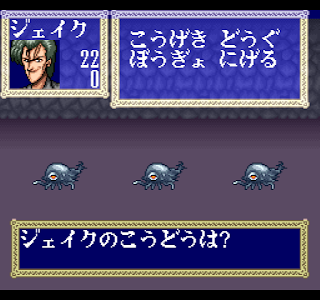 The battle system is nothing unusual. You take turns attacking, defending, or using items. Yakumo has a few spells he can use and Pai can call on various demons. These are quite powerful and stick around for several turns. They have a base MP cost but you can spend extra points for more damage. They're cheap to cast, and you recover all MP and HP on level up, so Pai can pretty much use these any time she wants. From what I can tell, nobody gets any additional moves on level up, so what we start with is it.

There are two other options. Yakumo can heal himself but it heals so little that it's not worth it. Pai has a move called "Sanjiyan"; I'm not sure what it does. In the manga she gets more powerful when her third eye on her forehead opens, but maybe Pai has to be low HP or something like that for it to work.

When you get a critical hit, there's a cutin image of the character: 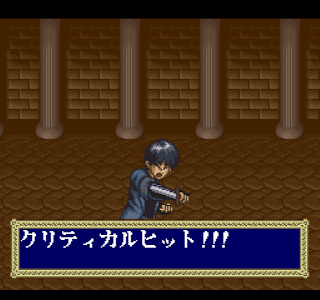 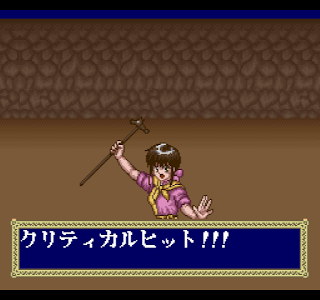 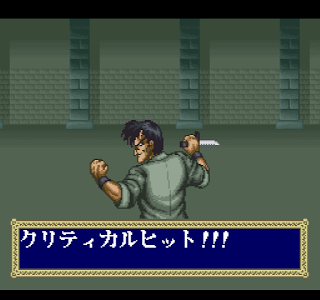 Our goal in Greece is to find the Holy Spear, which will require meeting various Greek gods and going through dungeons. The dungeons are all laid out on a grid system a little like Legend of Zelda:
This makes it fairly easy to map things out. Like a lot of games from this era, there's basically nothing in the dungeons except for a few treasure chests (most of which are worthless) and the goal. In general there seems to have been a stronger feeling in older games that simply wandering around and fighting monsters was its own reward.

This is what we do in Greece:
There's a certain sameness to all of this. The dungeons are all very similar. There aren't any bosses, and there really isn't any story other than "here's where you go next". At least the encounter rate is low, so exploring the dungeons doesn't feel like a slog. So far the game is pretty easy as well. I did encounter one monster that did almost Pai's max HP but with Jupiter Talismans (which heal full HP) and Pai's spells it wasn't really that difficult.

Now we're off to Mexico to find the next key.

As I said in the last update, I'm going to be on vacation this week so I don't know when the next update will be. I may not be able to get one out next Saturday but definitely July 15th at the latest. Every other chronoblog seems to be on summer break too so I guess I'm just joining the party.